The rate of emergency departments (ED) visits for bicycle-related traumatic brain injuries (TBI) and concussions decreased by almost half (49%) among children, but only by 6% among adults between 2009 and 2018 according to a new report in CDC’s Morbidity and Mortality Weekly Report. 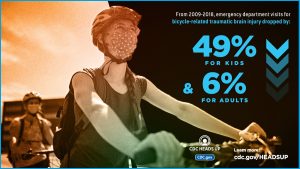 Key findings from the report, “Emergency Department Visits Due to Bicycle-Related Traumatic Brain Injuries Among Children and Adults — United States, 2009-2018,” also show that:

Bicycling is a great physical activity and is growing in popularity among Americans. Findings in this report highlight the need to expand effective bicycle safety interventions such as improving compliance to traffic laws, helmet use and bicycling infrastructure. These can help children and adults enjoy the benefits of bicycling and stay safe from injury, including TBIs.