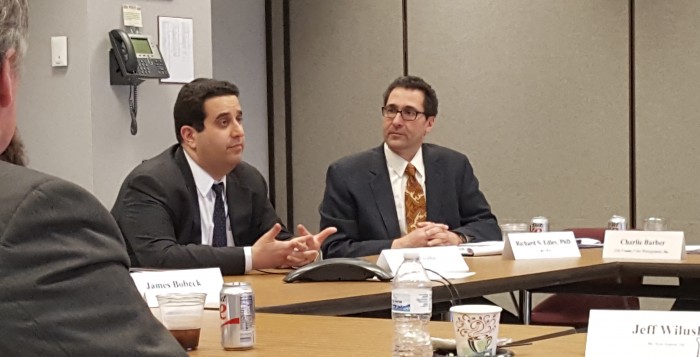 Department of Human Services (DHS) Secretary Ted Dallas spoke at the RCPA Board of Directors meeting on February 22 regarding Governor Wolf’s proposal to consolidate four state health and human service agencies. If approved by the legislature, the plan would be launched on July 1, 2017.

Although the Secretary referenced approximately $90 million in savings from this process, he also affirmed that this “cannot be just about saving money.” Dallas remarked that time spent dealing with the bureaucracies as currently constructed takes time away from providing services, and so the goal is to eliminate redundancies.

RCPA members brought up key topics such as population health, licensing, and services for persons with co-existing conditions. When asked how this consolidation will affect addressing the opioid crisis, Secretary Dallas responded that the focus would be shifted to treating the whole person, rather than each individual condition.

The meeting concluded with the Secretary requesting ideas for continued efficiencies and how to ultimately better serve members. On the day of the Governor’s announcement, RCPA issued a statement expressing support for the proposal and committing to working with the administration to implement the plan in a smart and cost-effective manner.

The Department of Human Services, under Secretary Ted Dallas, has established an IDD Fiscal Work Group over the last several months. This has been led by the Office of Developmental Programs Deputy Secretary Nancy Thaler and includes several RCPA members. The focus of this work group has been on the IDD residential rate methodology.

END_OF_DOCUMENT_TOKEN_TO_BE_REPLACED

On January 27, 2016, a letter was sent to Department of Human Services (DHS) Secretary Ted Dallas, requesting reconsideration of DHS’ decision to raise the minimum age of eligibility for Community HealthChoices (CHC). RCPA was one of more than 35 organizations and individuals that signed this letter of support.

Currently, the minimum age of eligibility for the Attendant Care, Independence, and OBRA waivers is 18. However, the CHC Request for Proposal (RFP) states, “CHC will serve adults age 21 or older who require Medicaid Long-Term Services and Supports (MLTSS) (whether in the community or in private or county nursing facilities)…. and current participants in DHS’ (Office of Long-Term Living) waiver programs who are 18-to 21 years old.” This would change the minimum age for home and community-based services administered by OLTL to age 21.

Concern was noted in the letter of how raising the minimum age of eligibility for CHC will create large gaps in services. Many examples were elaborated on the services that keep young adults in their homes and communities and out of institutional care, including home modifications, vehicle modifications, assistive technology, respite, and residential habilitation. The letter urges DHS to fix this critical problem before the CHC RFP is finalized.