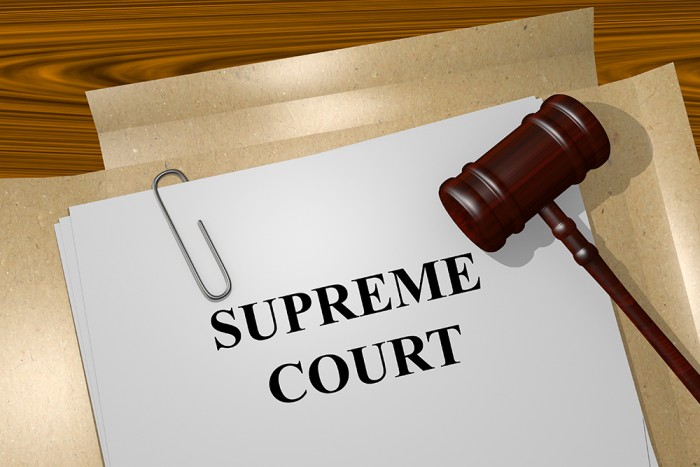 HARRISBURG (July 1) – A Democratic majority of the state Supreme Court read Pennsylvania statute the way Democratic Gov. Tom Wolf wanted them to read it, asserting Wolf has the right to veto any concurrent resolution adopted by the General Assembly to terminate a gubernatorial disaster emergency declaration.

Justices Max Baer, Debra Todd and Christine Donohue joined with Justice David Wecht, who wrote the majority opinion finding that Article III, Section 9 of the Pennsylvania Constitution requires all concurrent resolutions, including those adopted by the General Assembly under Section 7301(c) of the state’s Emergency Management Services Code to terminate a disaster emergency ordered by the governor, be submitted to the governor for his approval or disapproval.

The General Assembly early last month adopted House Resolution 836 which majorities of the two legislative chambers expected would trigger the provisions within Section 7301(c) to end a disaster declaration. Part of the section reads: “The General Assembly by concurrent resolution may terminate a state of disaster emergency at any time. Thereupon, the Governor shall issue an executive order or proclamation ending the state of disaster emergency.”

Wolf refused to adhere to the termination, arguing that without HR836 being presented to him for his consideration and action, the resolution was “meaningless.”

The administration pointed to Section 9, Article III of the Pennsylvania Constitution, which states, “Every order, resolution or vote, to which the concurrence of both Houses may be necessary, except on the question of adjournment, shall be presented to the Governor and before it shall take effect be approved by him, or being disapproved, shall be repassed by two-thirds of both Houses according to the rules and limitations prescribed in case of a bill.”

While a majority of Democratic justices sided with Wolf, Justice Kevin Dougherty, also a Democrat, in a separate opinion expressed that the majority, in its effort to support its opinion, had written into existing state law its own interpretation that is not supported by the plain language of the law. Dougherty wrote that given what he sees as the irreconcilable conflict between Section 9, Article III of the Pennsylvania Constitution and Section 7301(c) of the Emergency Management Services Code, the entirety of the statute delineating the declaration of a disaster emergency should be declared unconstitutional.

Wrote Dougherty: “In sum, I believe that Section 7301(c) is susceptible to only one reasonable interpretation — the one described by the plain terms of the statute itself. That plain language is clear, and leaves no room for the Governor to take any other action than that which is statutorily prescribed. Accordingly, while I have no doubt that it would be a far cleaner task to simply declare the statute ambiguous and apply the canon of constitutional avoidance to resolve this matter, that path is, unfortunately, unavailable to us. See, e.g., Robinson Twp. v. Commonwealth, 147 A.3d 536, 574 (Pa. 2016) (“Although courts should interpret statutes so as to avoid constitutional questions when possible, they cannot ignore the plain meaning of a statute to do so.”) (citations omitted). That being the case, and since the statutory mechanism crafted by the legislature is clearly at odds with Article III, Section 9 of the Pennsylvania Constitution, it must be stricken as unconstitutional.”

The court’s two Republicans – Chief Justice Tom Saylor and Justice Sallie Updyke Mundy – in the minority opinion written by Saylor echoed Dougherty’s concern the majority read into the law something that does not exist.

Wrote Saylor: “I view the majority’s decision to imply a presentment requirement into the statute as being in tension with the rule that courts are not at liberty to insert words into statutory provisions that the legislative body has not included. See, e.g., Burke v. Independence Blue Cross, 628 Pa. 147, 159, 103 A.3d 1267, 1274 (2014). As noted above, when the Legislature has chosen to require presentment, it has said so. See, e.g., 71 P.S. §745.7(d) (“If the General Assembly adopts the concurrent resolution by majority vote in both the Senate and the House of Representatives, the concurrent resolution shall be presented to the Governor . . ..”). Thus, its failure to do so here does not appear to be unintentional.”

Saylor continued: “Moreover, while the principle of constitutional avoidance – on which the majority relies, see Majority Opinion, slip op. at 20 – is an important judicial tool for saving statutes when reasonably possible, the underlying justification is that the construction which avoids grave constitutional difficulties is likely to be faithful to legislative intent, as the legislative body does not intend to violate the Constitution. That underlying justification is diminished where, as here, the chosen construction substantially weakens the Legislature’s ability to act as a check on the actions of a co-equal branch. The reason is self-evident: the General Assembly is not likely to seek to weaken its own institutional powers, particularly vis-à-vis those of a separate and co-equal branch of government. And while the majority correctly observes that the Legislature has clarified that it does not intend to violate the Constitution, see Majority Opinion, slip op. at 23 (citing 1 Pa.C.S. §1922(3)), that precept alone cannot justify the use of constitutional avoidance to reach an interpretation which was not intended by the General Assembly – particularly as the overarching purpose of all statutory construction is to give effect to legislative intent. See 1 Pa.C.S. §1921(a). See generally Clark v. Martinez, 543 U.S. 371, 382, 125 S. Ct. 716, 725 (2005) (noting that constitutional avoidance is ‘a means of giving effect to congressional intent, not of subverting it’).”